East to West and The Beautiful Dreamers

So I made the biggest move ever in my life. At the end of 2013, with the assistance of my highway companion and darling angel, I drove across the country to the beautifully grey wasteland of Lemoore, California. It's really....hot. Though, to be honest, I get out as much as I did when I lived in Va. Feels just like home. With the exception of the poop smells and searing, dry (which I suppose is a selling point) heat. I recently updated my resume and it along with my work has really seen some big changes. I'm pretty proud of the direction things are going. Though I am still working hard to make a solid footprint out here, I think it'll all pay off in the end.
The series I imagined in my head is growing as the months pass and I have a small pile of beautiful dreamers to show for it. It had it's beginning with the Peruvian mummy girl I had read an article about and since being invited to paint Frida for a tribute show at ChimMaya Gallery in LA, I have added her to the dreamers. 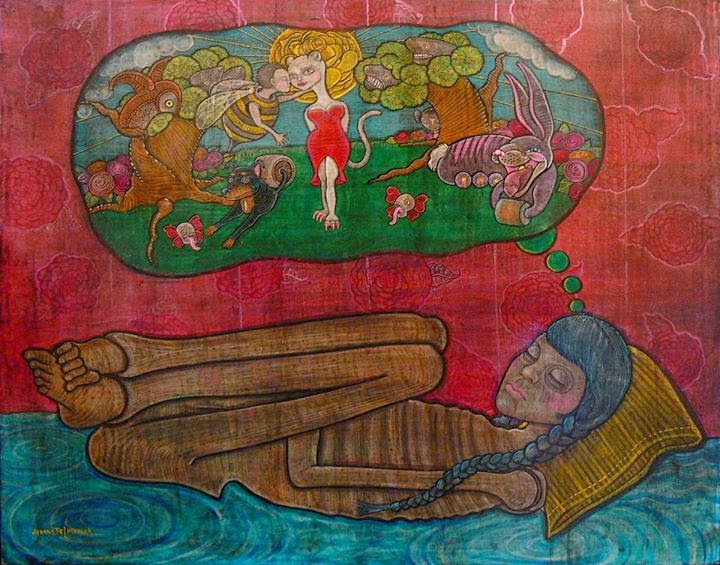 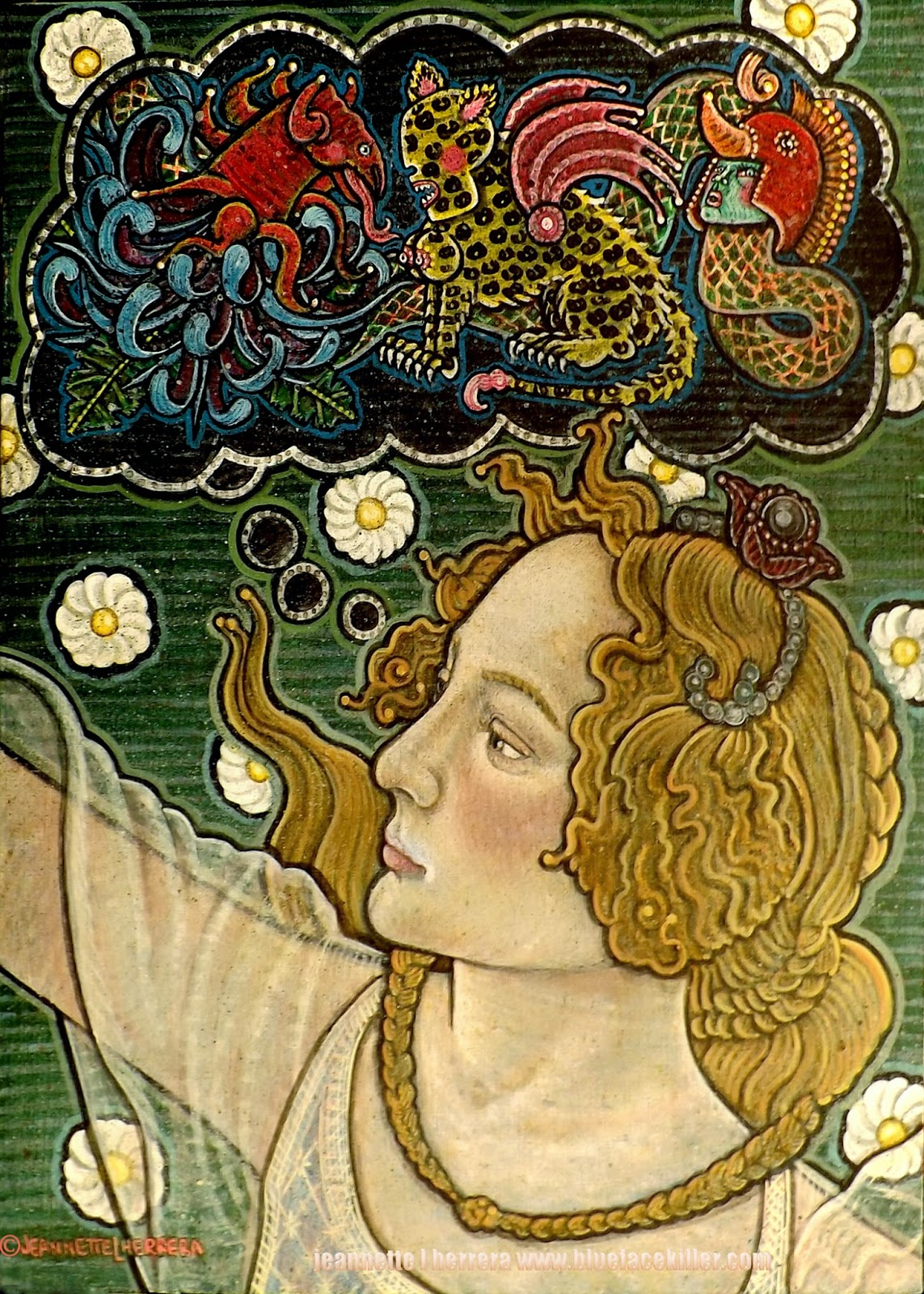 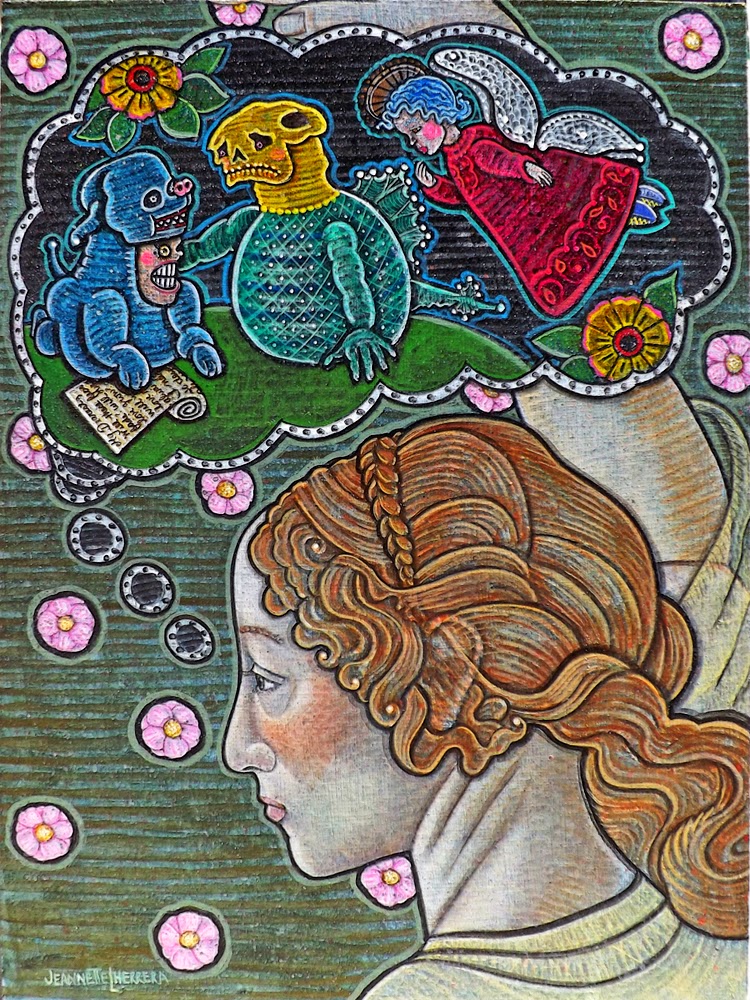 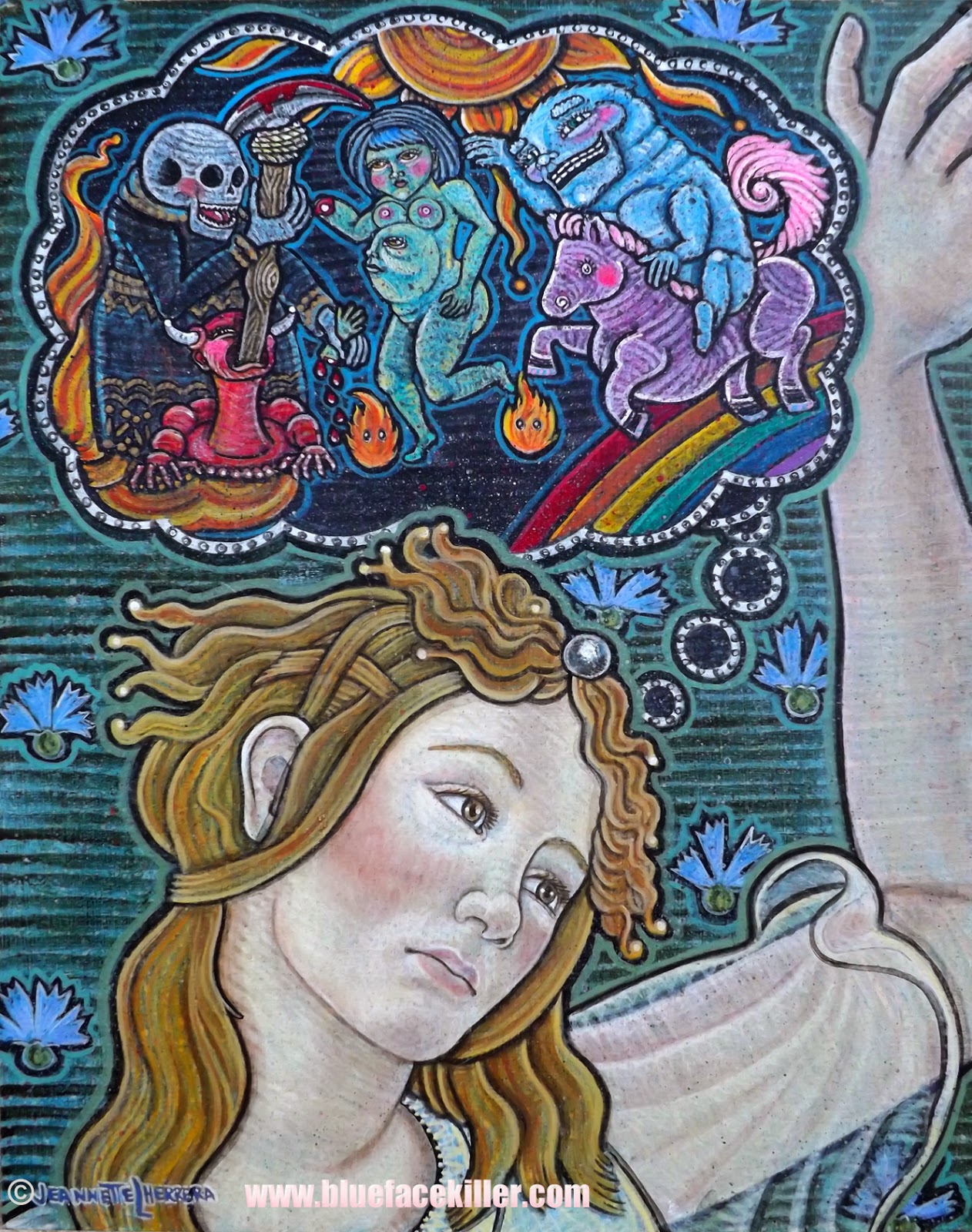 once someone loved me-8x10 acrylic on masonite 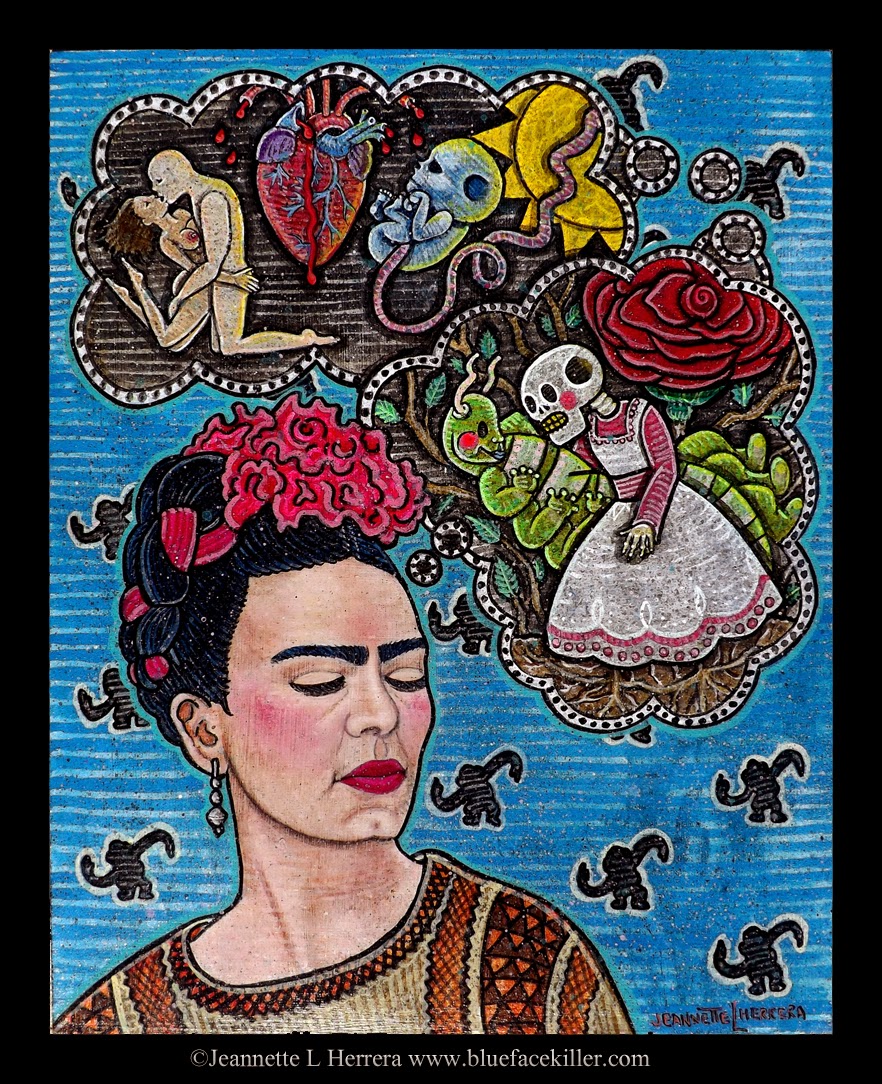 I dream in color -9x12 acrylic on gesso board 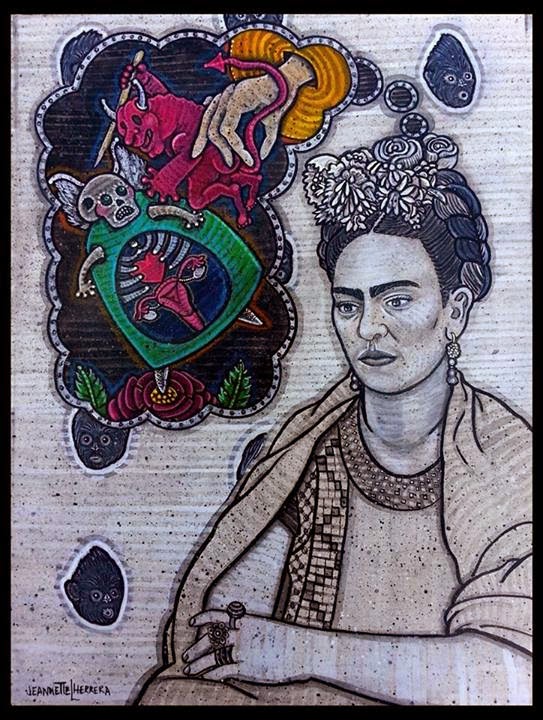 I suppose I often imagined leaving Virginia and though it hasn't always been easy being far from people I love, it's a very good life we're living here together.

You can currently see most of my work at Fresno Art Museum Partnership Gallery at Arte Americas in my solo show titled "Beautiful Dreamer", also at ChimMaya Gallery in East LA in Frida 2014
and in Chicanitas The Cheech Marin Collection in Las Cruces,New Mexico Las Cruces Museum of Art


Posted by Jeannette Herrera at 1:04 PM No comments:


Posted by Jeannette Herrera at 11:22 AM No comments:

Once I was asked to bring my portfolio to someone for a review and he said to me"you might have some issues with sex" Though I wouldn't call it an "issue" so much as a deep seeded and not entirely unwelcome preoccupation. So what...I like to paint giant veiny ones and boobies. Lots of boobies! Any black panel painting of mine does not begin with sketches but instead is created through a stream of consciousness that I can only compare to what someone would see in an instant upon viewing a Rorschach inkblot. In essence I am my own therapist. And not a very good one, I'd say. I might have stopped myself about 40 veiny ones ago if I took my patient's mental health seriously at all! Which I clearly don't......

Here is a collection of Rorschach paintings from end of 2012 up until now.

I'd do anything to be your everything
5x7"acrylic on masonite

Love will always save your soul
9x12" acrylic on canvas panel

Posted by Unknown at 3:27 PM No comments:

I really slacked on keeping up with my blog as busy as I was in 2012 and it has been my best year so far. Superheroes was the theme for many art fairs throughout the year so being a fan of the classics DC and Marvel since I was a wee little babe, I thought to pay an homage to just a few of my favorites. The answer to why I made them all Jewish is simple. I had always wondered what superheroes might be Jewish and an episode of Family Guy set it all into motion when I learned that apparently Optimus Prime is Jewish
Anyone who knows me knows that Optimus is not only my ultimate superhero but my ultimate fantasy. Yeah that might sound weird but I would totally have his robot babies. But now I know I would have to convert. A girl's gotta do what a girl's gotta do! Of course while I have been patiently waiting for him to propose any sort of rendezvous or (crossin' my fingers) ...marriage.... I painted these 4 panels. All 10x10 acrylic on composite boards. All but Supermun were painted in 2012.
The series hung at Art Aqua Miami during Art Basel represented by Alida Anderson Arts and the great Lenny Campello.

Posted by Unknown at 3:09 PM No comments:

One of my main inspirations is music. I am a girl of the 80's and so it goes without saying that 80's music is huge when it comes to what movies me to paint. I love hardcore, metal, opera... I'll give most things a chance  except that damn screamo crap!  While some are more obvious than others, my mind takes me to some odd places when I listen to music. Here are some of my musically inclined pieces.

"rick rolled"5x5 never going to give you up, thanks for getting stuck in my head. Freakin ginger

"This is the end" 9x12" inspired by soul crushing divorce and The Doors. Thank you Mr.Morrison
it is also a play off of a Dennis Hopper photograph that I love. They seemed to me to be very indifferent. It felt like the end of something to me.

"Cracklin Rosie" 11x14" - Neil Diamond. This song makes me as happy as that guitar humming!

"springtime for Jeannette and Germany" from my trip to Germany and Mel Brooks always making laugh about Germans hahaha!